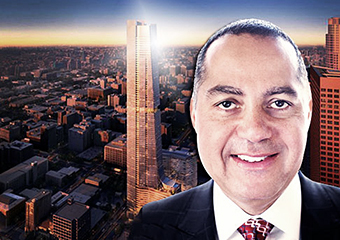 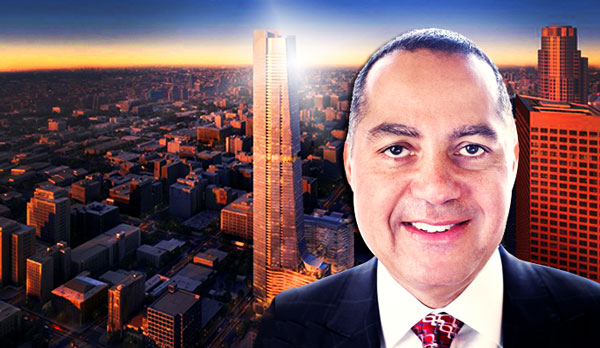 The East Coast developer has officially arrived in L.A., and he’s doing so in a big way — building what will be one of the tallest residential towers in the western U.S.

The site will include two hotels – operated by SLS and Mondrian – 250 condos, 425 rental units, retail, public space and a charter elementary school. The centerpiece tower will rise 88 stories, making it one of the loftiest skyscrapers on the West Coast. (Possibly in its eagerness over the project, the development touted the high-rise as the tallest building in the Western U.S. in a Thursday press release, before issuing a corrected statement a day later placing it among the tallest.)

The team, together with Handel Architects, beat out three other bidders for the job, one led by Lowe Enterprises and Gensler, another by Onni and Natoma Architects, and a third team of Trammel Crow Company and MAD Architects.

When The Real Deal asked how Peebles was doing on Thursday, we expected him to sound more excited given his West Coast coup.

“I could be doing better,” he acknowledged.“I broke my leg.”

Peebles was limping around Los Angeles while there to speak in front of the City Council on the Angels Landing deal. He had injured himself stepping out of his New York City townhouse a couple weeks ago.

We asked Peebles about the project, his experience working with two longtime friends and his future plans in L.A. How does project break down between the partners? What in particular are you bringing to the table? The structure of the deal is MacFarlane and Peebles are primary partners, and Claridge is a local partner. MacFarlane and I are each 40 percent partners. We’re collectively co-developers and sharing responsibilities on every element from predevelopment to design development, construction and management. It’s really a joint venture between the three of us.

[Peebles Corporation] has extensive public-project development experience. We have had 30 years’ experience developing projects in partnership or with significant government involvement. It’s one of the unique things we do, so we’re helping to put together Request for Proposal responses and moving things forward with the city. We also bring our experience with hospitality space and mixed-use development. We’re working through the entitlement process, regulatory process, working with the community, with government agencies, and bringing everyone together to move the development forward.

How did you come to work with Claridge and MacFarlane? I’ve known [Claridge founder] Ricardo Pagan for a decade, and I’ve known [MacFarlane CEO] Victor MacFarlane for 20 years. MacFarlane and I have done projects in Miami and D.C. together, and we’re good friends.

The beauty is any of the three of us could have bid on this separately, but we thought it made sense to join together and form a super team. Victor moved out to Los Angeles not five years ago and encouraged us to look out there, so we went and looked a few times with him, then we started zeroing in on where we had interest and identified this site. We did further due diligence and decided to pursue this when the RFP came out.

All three of the firms are minority-owned. How important was that to you when teaming up? That’s something we were very mindful of. Something that all three of us share in common is a commitment to equal economic opportunities. The selling point for the three of us to join forces was that it would be a wholly-owned development by minority developers that are each capable of developing projects themselves, but decided to join together to build a transformative development. By being [among] the tallest building in the western U.S. is transformative; by being the last site the city owned in Downtown LA is another key element and transformative; a billion-dollar-plus project itself is transformative; and adding to that is that it’s a wholly-owned minority development team with two of the most successful African-American entrepreneurs in the country made it more transformative. It’s also an opportunity to provide minority- and women-owned businesses contracting opportunities. Our goal is 25 percent on all our projects across the board.

Why do you think your proposal stood out? One, being [among] the tallest building in the western U.S., and from a design perspective, Handel designed an amazing building. The strong financial capacities of our developers, the solid financing proposals and our development program was the most unique. We have a good understanding of what government look for. One thing they like is hotels, because they attract tourism to an area and are tremendous job generators, from unskilled labor up to the executive staff. There’s a growing residential population in the area, and we think the charter school was a determining factor. Also, we were the only team to emphasize a commitment to minority- and women-owned businesses, and that was something important to a city as diverse as Los Angeles.

Is the financing for the project in place? MacFarlane is a majority private equity fund and their dollars are committed, ours are committed, and we have strong interest from the senior debt side. We can’t lock it down without contracting in place, design and development, and the maximum price guaranteed. We have strong interest from some of the most active lenders in the marketplace, and we’ve all received calls from lenders [showing interest].

Was there anything that ended being a real point of contention with the city? What L.A. did was astute. After narrowing down the 10 or so proposals to four and an RFP, they gave the developers a draft of their proposed developer agreement in contract and all of the respondents had to review, comment and disclose changes they were seeking. Then they had comprehensive presentations from developers with follow-up questions. They notified us on Friday we would be selected, and on Tuesday we testified. It went to the full City Council on Wednesday, so that process was so rapid.

The [typical] period between the award and action could be anywhere between three months to a year, and the time between a selection and official action can be weeks or months. That creates an environment of lobbying and negotiations, but this streamlined it. The City Council ratified it, and the city already understands our comments and are turning around documents already. We’ll probably get paperwork back on Friday or the middle of next week, with red-line changes and comments on our changes.

How did you determine the number of homes — 5 percent — set aside for people making between 80-120 percent of the area median income, and why are there no affordable units below that? We have some room on that, it’s going to depend on financing. We can take that up to a higher level based on the number of units or affordability. There was a minimum threshold, and we wanted to do that.

The city also looked at your community-outreach plans. Yes, and we’re going to do more of that. On this project, we got initial feedback and incorporated it into the development plan. We included the 25,000-square-foot Angel Terrace that can be used for different public activities. We want it to be accessible to a wide range of people — not just where wealthy residents and hotel guests come, but for a broad range, including the people who work in offices there.

There seems to be a lot of talk about how this will transform Downtown, and there’s been a lot of development in the area recently. Do you think it’s ready for something this big? Absolutely. For one, the Los Angeles Convention Center is in desperate need of hotel rooms, and Angels Landing is close enough to be accessible. You’ve also got the Broad Museum and a lot of offices in Downtown, so from the hotel side it’s definitely sorely needed. I think having a plaza that’s conducive for people to utilize instead of office plazas, which get a lot of use but mostly get dark at night, is a significant add. It’s not a gigantic site; it’s two-and-a-half acres, but the buildings go up and you have Angel Flights nearby. It’s all a part of creating a center of attraction for people who are there.

What do you think Downtown needs to keep evolving in the right direction? I think Downtown needs to continue to have residential development on all levels, from a high level to workforce housing and in between. It needs more retail — service retail — to be an amenity for a growing residential population. I think it could use more midsized office space — there’s the WeWork in Downtown — and a few more buildings that are live-work could be helpful down there.

What’s next for you in L.A.? Any plans to do more here? Absolutely. We’ve been looking to enter L.A. since the mid-2000s and then the market crashed, so we focused on things we had. We’ve been looking again for the past three or four years. This is our entry into the marketplace. We’re opening an office in L.A. Ricardo, Victor and I look at [Angels Landing] to be a test for future opportunities.