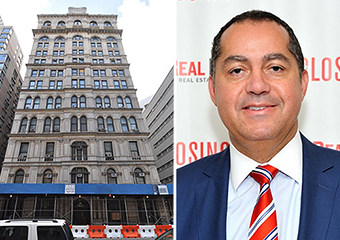 Don Peebles may not sound bullish on the future of the city’s luxury real estate market, but that’s not stopping the developer from going ahead with his luxury condo conversion of in Tribeca.

Peebles is close to sealing a $334 million construction loan from Bank of America that will finance the conversion of the 13-story, 419,000-square-foot building. The deal is expected to close Friday.

Miami-based Peebles Corp. acquired the property – the single largest building ever sold by the City of New York – for $160 million in December 2013, according to the New York Observer. The developer partnered with Israel-based real estate firm Elad Group on the project, which will be designed by architects Beyer Blinder Belle.

The redevelopment of , which has an alternate address of , will result in 151 new residential condo units set across 364,000 square feet of residential space, according to filings with the city’s Department of Buildings. The property will also hold a 7,200-square-foot community facility and around 2,200 square feet of commercial space.

The project, which is Peebles’ only active development in the city, was previously slated to also include a boutique hotel – but those plans were not specified in building permit filings.

The 19th century-era, Landmarked Building Once Served As The Headquarters For New York Life Insurance Company And More Recently House The New York City Criminal Court, according to the Observer.

Peebles, who is reportedly mulling a possible mayoral run against incumbent Bill de Blasio, recently told Bloomberg TV that the city’s luxury residential market is due for a “slow down” after seeing “rapid [price] appreciation” in the past several years. [NYO] – Rey Mashayekhi