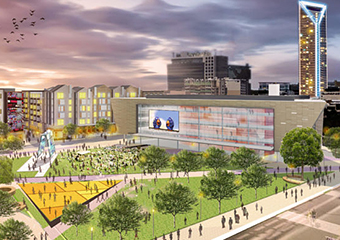 BK Partners, a group headed by African-American developer Don Peebles, has been selected by Mecklenburg County to transform 17 acres in Second Ward into Brooklyn Village, a massive mixed-use project of retail, apartments, offices, open space and a 280 hotel rooms. Courtesy of BK Partnership

BK Partners has been selected by Mecklenburg County to transform 17 acres in Second Ward into Brooklyn Village, a massive mixed-use project of retail, apartments, offices, open space and 280 hotel rooms.

Don Peebles’ group, which is incorporated in Washington, D.C., was picked over two other developers by a selection team of county officials, including County Manager Dena Diorio. Commissioners ratified that recommendation in a 5-3 vote Wednesday.

Uptown’s Second Ward was once home to Brooklyn, one of the city’s oldest black neighborhoods before it was razed during a nationwide movement for “urban renewal” in the 1960s. The area now includes the shuttered Board of Education building, Marshall Park and Bob Walton Plaza.

BK Partners said it will spend $683.3 million on the project, which will be split into two areas.

Brooklyn Village South will be built south of Stonewall Street, across from the Mecklenburg Aquatic Center. It will have more than 500,000 square feet of office space, retail and apartments, and a 150-room hotel.

Brooklyn Village North will be built in between Martin Luther King Jr. Boulevard and Third Street, mostly on the site of Marshall Park. It will be a mix of apartments, retail, offices and a 130-room hotel. There also will be open space.

InterContintental Hotels will develop both hotels for BK Partners. There will be 1,244 residential units on both sites, with 10 percent set aside for affordable housing.

The county said The Peebles Corp. is the nation’s largest minority-owned real estate developer. Peebles has built projects such as Lincoln Place in Miami Beach.

A local firm, Conformity Corp., which built the Southborough project in South End that includes a Lowe’s home improvement store and apartments, is also a partner. Stantec Consulting Services is also part of BK Partners.

Peebles said the project won’t be a cookie-cutter development.

“This won’t look like a master-planned community,” he said after the meeting. “It will be organic, with three different designers.”

BK Partners will pay the county $50.18 million for the land.

Diorio said the BK Partners proposal was the best financially for the county. She said Crescent hadn’t given a specific dollar amount for its offer to buy the land, and that CitiSculpt wanted the county to pay for some of the “horizontal improvements” to the site to get it ready to build.

One sticking point for Cotham and others was a belief that BK Partners and the other proposals didn’t have enough open space. Leading up to the vote, groups such as Sustain Charlotte questioned why the county would give up 5-acre Marshall Park in exchange for less than 2 acres of park space.

The BK Partners proposal calls for 1.9 acres of open space.

Cotham said she didn’t know the county was losing so much park space in the proposal.

“I didn’t realize that we would be losing 5 acres of Marshall Park,” she said. “I would have been jumping up and down (had I known).”

Commissioner Bill James, who voted for BK Partners, said the county never made a promise that there would be 5 acres of open space in Second Ward.

Diorio said her staff focused on what commissioners told them were their priorities: honoring the history of Brooklyn and bringing affordable housing to the area.

Diorio also set strict parameters on the selection process. She asked that commissioners not speak to the developers making the proposals out of fear it would lead to accusations of undue influence. In addition, the developers did not make formal proposals to commissioners; county staff handled all of the negotiations.

“You aren’t including the people, what the people want,” she said. “I don’t see them at the table.”

The next step is for Peebles to negotiate with the county over final terms. He said he expects that to take a year.

BK Partners told the county the project would open in phases, starting in 2021.