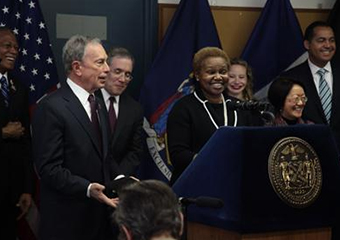 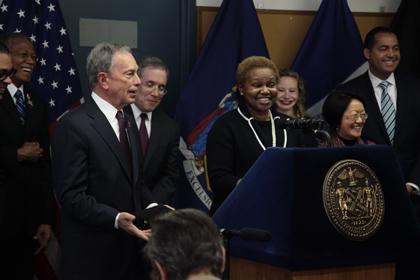 City on Track to Surpass Goal of Reducing 1.2 Million Square Feet of Office Space; Total of $470 Million in Rent and Operating Expense Savings Achieved for the Next Two Decades

Mayor Michael R. Bloomberg, Deputy Mayor for Operations Cas Holloway, Department of Citywide Administrative Services Commissioner Edna Wells Handy and New York City Economic Development Corporation President Seth Pinsky today announced an agreement to sell two City-owned buildings for nearly $250 million as a part of the Administrat  ion's government consolidation plan to reduce City government office space by 1.2 million square feet by 2014. The Mayor first announced the intention to sell the properties – 49-51 Chambers Street and 346 Broadway – in his 2012 State of the City address, and it represents a major step in the Administration's efforts to increase efficiency by eliminating underused office space and relocating employees to office environments that better serve the City's needs. The agreements for the sale of the buildings, which will be presented to the Manhattan Borough Board for approval,will generate an estimated $120 million in net revenue for the City, after the costs of relocating various City agencies and the creation of a space for public use for the community. In addition, the City will save approximately $120 million in operating expenses over the next two decades. The Mayor was joined at the announcement at 49-51 Chambers Street, formerly the Emigrant Industrial Savings Bank, by Manhattan Borough President Scott Stringer, Council Member Margaret Chin, R. Donahue Peebles, Chairman and CEO of the Peebles Corporation and Joseph Chetrit of the Chetrit Group.

"In 2010, we set a goal of reducing City agency office space by 10 percent within four years – equivalent to 1.2 million square feet," said Mayor Bloomberg. "Today's agreement brings us more than 80 percent towards that goal, dramatically reducing the amount of office space used by City agencies and making agency operations more efficient and less costly. Moreover, it will continue the revitalization of Lower Manhattan, stimulate economic development and bring more than $100 million into the City's treasury."

In 2010, the Mayor announced plans to consolidate City-owned real estate, eliminating 1.2 million square feet of City office space over four years. After the sale of the two buildings announced today, the City will have eliminated a total of 1,067,000 square feet since 2010, producing at least $470 million in annual rent and operating savings over the next 20 years. Through a competitive Request for Proposals, the Chetrit Group and the Peebles Corporation were selected to purchase 49-51 Chambers Street and 346 Broadway, respectively. As a part of the agreement and following extensive community input, the City worked with the Peebles Corporation to convert 16,000 square feet of 346 Broadway into a digital arts and media space dedicated to public use.

"In the modern office environment designed to foster collaboration through open seating plans and fewer offices, the City currently occupies more office space than it needs." said Deputy Mayor Holloway. "The sale of these two Civic Center buildings and relocation of City employees to modernized office space will save money and give many City employees brand new work spaces that encourage open communication and teamwork."

"With the sale of these two buildings, we will see the fulfillment of long-desired mayoral goals," said Commissioner Handy. "First, we bring these buildings to a higher and better use. In addition, we further the Mayor's goal of space optimization and utilization, reducing the City's use of leased office space in favor of existing city-owned property and providing an opportunity to upgrade the workspaces for a new generation of city workers. Finally, we meet the Department's goal to provide service that is better, more efficient and greener while bringing in much-needed funding to the City coffers."

"With the sale and redevelopment of these historic buildings, they will not only be restored and put to better use, but they will also bring a significant economic and cultural impact to Lower Manhattan and the entire City," said New York City Economic Development Corporation President Seth W. Pinsky.

"A year ago we raised concerns over the lack of community-oriented uses associated with the Civic Center sale, and since that time, we have been able to work with Mayor Bloomberg, Deputy Mayor Cas Holloway, DCAS, and EDC to modify the plan in a way that can meet both the City's fiscal needs and those of the community," said Borough President Stringer. "The new plan will create and fit-out a 16,000 square-foot, youth-oriented digital arts space. To compliment this programming, the city's proposal has provisions for hiring low-income New Yorkers through the HireNYC program and including Minority and Women Owned Businesses/Enterprises. I would like to thank the administration for working collaboratively on this project and look forward to continuing to resolve any outstanding issues, such as the programming of the community space and ensuring a high economic benefit through the inclusion of good paying jobs."

"I want to thank the City for engaging the Lower Manhattan community to help determine the use of these publicly-owned buildings," said Council Member Chin. "I am pleased at the inclusion of community space for downtown youth programming in 346 Broadway that ultimately will reinvest $35 million in our community. The sale of these buildings will help generate much-needed revenue for our City and will cut down on operating expenses. I want to thank Mayor Bloomberg and Deputy Mayor Cas Holloway and offer my support in their drive to make our City's government more efficient."

"Not only has DCAS led the effort to revitalize and optimize City government space – but these sales will create new life for distinctive buildings that have been an integral part of Lower Manhattan for more than a century," said Joey Koch, DCAS Deputy Commissioner and Chief Asset Management Officer. "These buildings have great bones and they will be restored to their historic grandeur."

"I would like to express my gratitude to the Mayor and to the City of New York for the opportunity to restore and develop this very significant building," said Joseph Chetrit of the Chetrit Group. "The Chetrit Group looks forward to working with the City and the Lower Manhattan community as this project moves forward."

Since 2010, the Department of Citywide Administrative Services has also completed a total of 50 City agency relocations, consolidations and space termination projects – with 21 currently underway and 15 additional projects in the development phase. In addition, the Department has created new metrics for agencies to track square feet per employee to hold agencies accountable for space usage and identify trends and opportunities for reductions within their real estate portfolio.

The City, in part, has been able to consolidate office space because of a reduction in the City workforce by approximately 18,000 employees since the start of the Bloomberg Administration – with a City government that is providing more services with fewer employees through innovation and efficiencies.

Located at 49-51 Chambers Street and 346 Broadway, the properties – which currently house various City agencies – will be redeveloped as a mix of hotel, residential and community uses under the agreements, which will be presented to the Manhattan Borough Board. Together, these projects are anticipated to bring in excess of $500 million in private investment, generate more than $70 million in additional tax revenue over the next 30 years and create more than 550 construction jobs and 60 permanent jobs. The developers have committed to following a minority-owned business enterprises and women-owned business enterprises plan and HireNYC program, which require good faith efforts to achieve the hiring and workforce development goals.

The Peebles Corporation, a certified minority-owned business enterprise and one of the country's largest African-American owned real estate development company, will buy 346 Broadway for $160 million and is expected to convert the property into a mixed-use building with residential, hotel, retail and community facility components. The agreement also includes the establishment of a 16,000 square feet digital arts and media community facility located at 346 Broadway for public use. The Chetrit Group, one of the most active developers in New York City, is set to purchase 49-51 Chambers Street for $89 million and expected to convert the property into residential and retail uses. Approximately 30 percent of the building at 49-51 Chambers Street is currently vacant or used for storage – an inefficient use of valuable real estate.

The City created a Community Task Force – comprised of the Department of Citywide Administrative Services, local elected officials including Borough President Stringer and Council Member Chin and representatives from the community board – to incorporate community feedback and recommended uses for a public facility at the location following the sale. Based on recommendations from the Task Force, the City worked with the Peebles Corporation to integrate the 16,000 square feet community facility for digital arts and media within 346 Broadway.

In the 1960s, the City acquired 49-51 Chambers Street and 346 Broadway as part of a larger plan to improve the Manhattan Civic Center that ultimately never came into fruition. Since then, the buildings have been primarily used as offices for City agencies. In April 2012, the Department of Citywide Administrative Services and the City's Economic Development Corporation issued a Request for Proposals for the disposition and redevelopment of the buildings – both of which have already been approved through the City's uniform land use review procedure. As well-positioned properties in Lower Manhattan, these buildings are strong candidates for adaptive reuse.