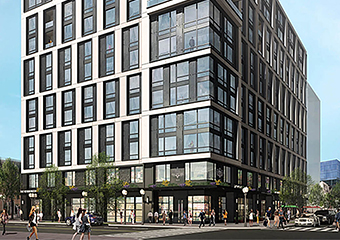 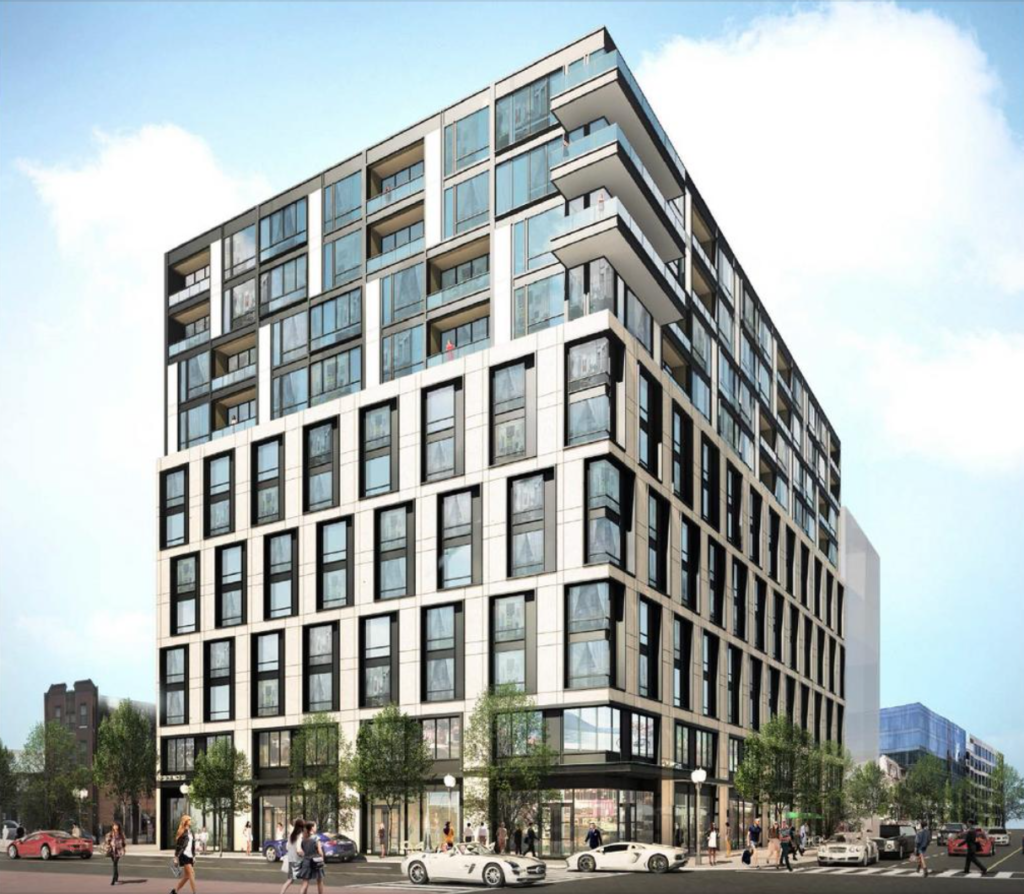 An overview of the Peebles project slated for Fifth and Eye streets NW in Mount Vernon Triangle. The first eight floors will house a hotel, while the top four floors will be home to market-rate residential.

The Peebles Corp. has submitted plans to construct a combination hotel-apartment building at Fifth and Eye streets NW in Mount Vernon Triangle, on a D.C.-owned site that the city has attempted to redevelop since before the Great Recession.

According to a zoning application filed Friday, the Fifth and Eye project, at 901 Fifth St. NW, will include a 153-room hotel on the first eight floors and a 52-unit “apartment house” on floors nine through 12. There will be 5,500 square feet of meeting/function space, roughly 7,000 square feet of restaurant and cafe uses on the ground floor, and 86 parking spaces — well shy of the 127 required under the zoning regulations. The 174,278-square-foot building will rise to 130 feet.

The development plan appears to be a downward shift from the previous incarnation, which called for a 200-room Standard International Hotel and 60 market-rate condos.

TPC 5th & I Partners LLC, led by Peebles, is seeking variances from parking and rear-yard requirements, spurring its Friday application with the Board of Zoning Adjustments.

Peebles was selected to develop the site in May 2014, by former Mayor Vincent Gray's administration. The deal, which calls for the Peebles-led LLC to pay $28 million for a half-acre lot assessed for less than $18 million, was approved by the D.C. Council in December.

The District chose Peebles (with partners MacFarlane Partners and The Walker Group LLC) for the project over bids from three other teams: Akridge, The JBG Cos. and Trammell Crow Co. The District has said that Peebles’ offer included the most money for the land and the most affordable units.

Peebles has agreed to construct 61 units of affordable housing off-site, in a new seven-story building at 2100 Martin Luther King Jr. Ave. SE — on the parking lot of an office building Peebles already owns. Peebles also said it will renovate the Seaton and Milian parks in Mount Vernon Triangle.

The redevelopment of Fifth and Eye is a decade in the making. Donohoe Development was selected to tackle the site a week before Lehman Brothers collapsed in September 2008. The Arts at 5th and I, as Donohoe called its project, was at first scaled back, and then canceled by the District in February 2013.