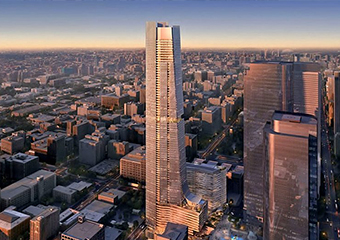 Condos, Restaurants, An Elementary School. How An 80-Story Skyscraper Could Transform Bunker Hill 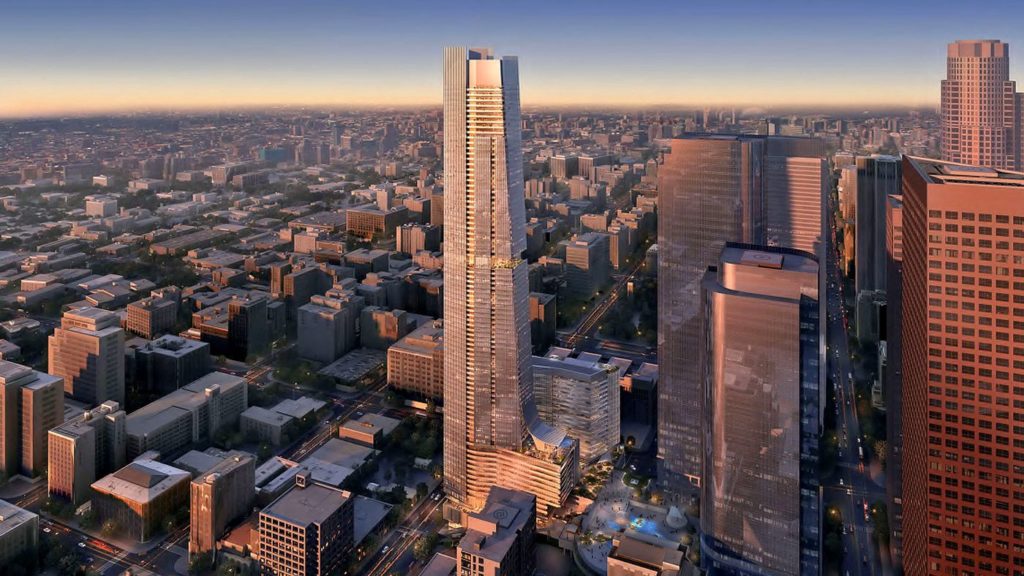 A rendering of the proposed $1.2-billion Angels Landing skyscraper complex on Bunker Hill that would feature hotels, residences and shops. (Handel Architiects)

Even in an era of mega real estate developments in downtown Los Angeles, the Angels Landing proposal stands out.

On a steep, barren hillside next to the landmark Angels Flight railway, developers plan to erect a $1.2-billion residential, hotel and retail complex anchored by a skyscraper of at least 80 stories that would be one of the tallest buildings west of the Mississippi River.

The process could take several years, but the developers, a trio of minority-owned firms, plan to file an application with the city next month to start the official approval process. The City Council has already granted them an exclusive negotiating agreement to develop the city-controlled 2.2-acre site at Fourth and Hill streets.

Their proposal in December won a city competition among would-be developers who coveted the opportunity to build a large-scale project in the heart of downtown.

"It's basically a neighborhood within a building," said developer Don Peebles, chairman of New York-based Peebles Corp. "It's the wave of the future for urban living." 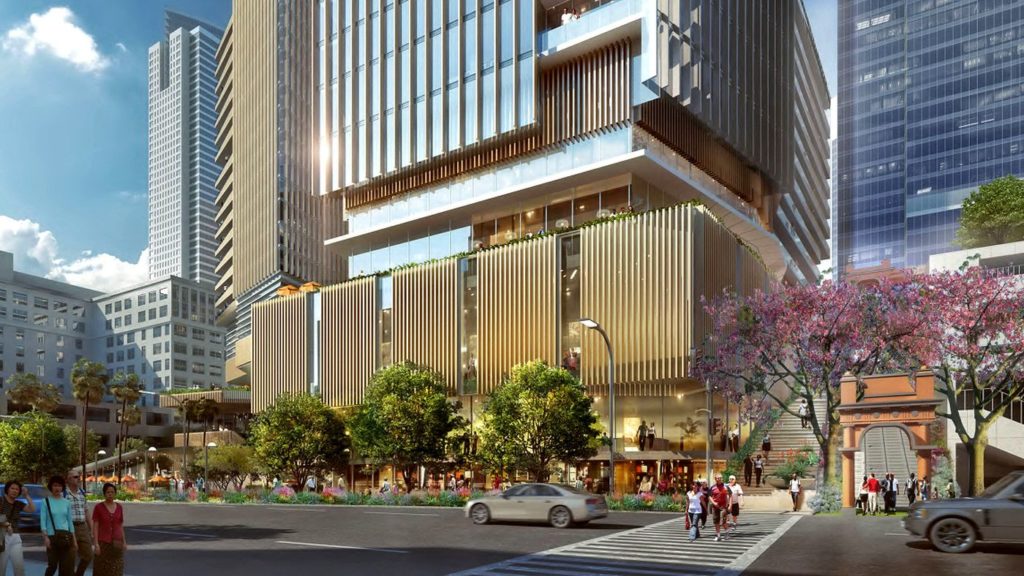 A rendering of the Angels Landing project and the adjacent Angels Flight railway as seen from Hill Street. (Handel Architiects)

The mixed-use concept for Angels Landing, which includes apartments, condominiums, restaurants and an elementary school, is a dramatic departure from the downtown L.A. skyscraper building boom of the 1980s and early 1990s that exclusively pumped out fancy office towers.

The Angels Landing site originally was expected to hold the third office skyscraper in California Plaza, where the second of two towers was completed in 1992. By that time, however, downtown was substantially oversupplied with offices and new development came to a halt.

The office market is still soft, but demand for housing downtown has jumped in the last 15 years as thousands of new apartments and condominiums have helped transform much of downtown from a business park into a neighborhood where people live, shop for groceries and walk to outdoor cafes.

But while Bunker Hill has top-flight cultural institutions such as Walt Disney Concert Hall and is a destination for about 40,000 office workers each weekday, it has few residents compared with other parts of downtown.

Angels Landing and a $1-billion dollar development called the Grand are poised to dramatically change the Bunker Hill vibe.

The Grand, designed by architect Frank Gehry, will be an open-air complex of apartments, condominiums, movie theaters, restaurants and shops that promises to enliven a city block across from Gehry's Disney Concert Hall that has been mostly dead for half a century.

Work on the project at Grand Avenue and First Street by developer Related Cos. is set to begin in the fall. 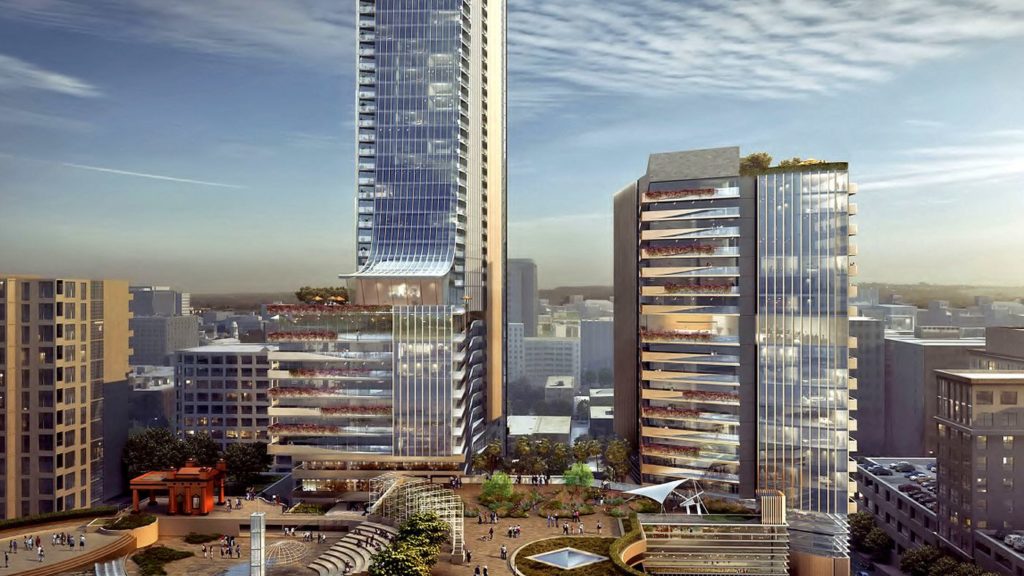 A panoramic rendering of the Angels Landing complex. (Handel Architiects)

A few blocks south is the Angels Landing site, unoccupied save for occasional visits by flocks of goats brought in to chew weeds and brush off of the precipitous hillside. It was historically part of the business district but has been vacant for decades after the city cleared Bunker Hill for urban renewal.

"There's going to be some 'there' there," said Rising, president of Rising Realty Partners.

His firm owns one of the California Plaza office skyscrapers and competed for the Angels Landing site but lost to Peebles, MacFarlane Partners of San Francisco and New York-based Claridge Properties.

"I'm a huge proponent of what they are doing," Rising said of the trio's proposal. "We also felt that the site needed residential" development.

The right design could open up the top of Bunker Hill, he said, which is difficult to reach on foot from the Metro Station at the corner of the development site at Fourth and Hill streets — unless you pay $1 to ride the Angels Flight cable-driven railway.

That challenging topography can be turned into an asset for Angels Landing, architect Glenn Rescalvo of Handel Architects said. His plan calls for terraces, passageways, ramps, stairs, escalators and elevators to make it easy for people to move around or hang out.

"We want to make the site as permeable as possible," he said. "You could enter from different points and reach all the other locations."

Buildings would fill only half the site, leaving room outdoors for landscaped public terraces including one overlooking Angels Flight railway midway up its path.

Above underground parking and lower-level shops and restaurants would be two towers.

The shorter tower of about 27 stories would house a charter elementary school and a 289-room Mondrian hotel with a rooftop pool and bar.

The main tower would reach a minimum of 80 stories and include a more luxurious 192-room SLS hotel with its own swimming pool. Above that would be 425 upscale apartments along with some subsidized affordable units. The top floors would hold 250 condominiums — and another swimming pool.

Technically the tallest building in L.A. would still be the 73-story Wilshire Grand Center, which reaches a height of 1,100 feet with the help of a spire on top.

As planned, Angels Landing would be 1,020 feet tall, but its top floor penthouses, Recalvo said, would be higher than the highest occupied floor of the Wilshire Grand, Recalvo said.

The plans are still tentative, however, and the temptation to seize bragging rights tantalizes the developers.

"The tallest? We are striving for it. We definitely want to be able to say that," said co-developer Victor MacFarlane, chairman of MacFarlane Partners.

As currently proposed, however, Angels Landing has maxed out the available density allowed for the site and the developers seem content with boasting that they will have the highest roof line in the West, a distinction now applied to U.S. Bank Tower, technically the second-tallest building in the city.

MacFarlane is already building a $400-million residential development a block away on Fifth Street, an apartment and retail complex that includes 660 apartments and a 24-story tower that will overlook Pershing Square.

He predicts that residents who move there or to Angels Landing will be young professionals and empty nesters who want to live in an urban setting but don't seek the more lively entertainment-oriented district growing around Staples Center and L.A. Live, where two other $1-billion mixed-use projects are being completed.

Financing to build Angels Landing should be available through conventional sources, said MacFarlane, who develops property on behalf of pension funds and other large institutions.

But the real estate market as been on the upswing for several years so it may be a while before big-money backers jump in, he said.

"It's not going to be financed in this cycle," MacFarlane said, "unless this cycle breaks all kinds of length records. We are three to four years from breaking ground."

Major projects such as the Grand and Metropolis, which is nearing completion north of L.A. Live, often take many years to execute, however. 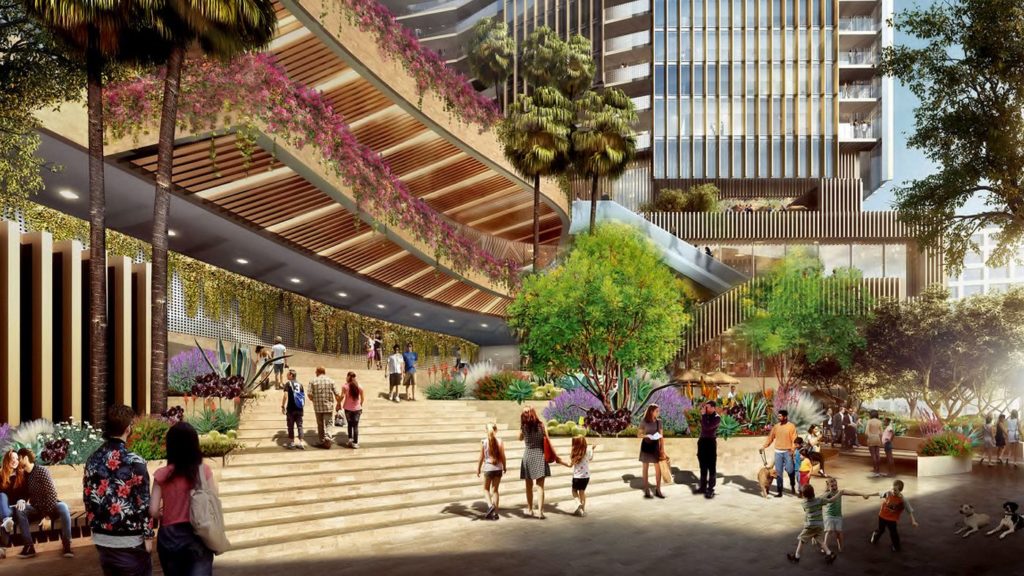 Rendering of a landscaped plaza at the project. (Handel Architiects)

"Angels Landing is like any other mega project," downtown real estate consultant Hal Bastian said. "It will take more time to [get to] construction than anybody would expect — and it will get done."

To start Angels Landing it will cost as much as $40 million just to buy the land and go through the design, approval and permit process, MacFarlane said. Construction would take an additional 41 months, perhaps putting completion around late 2024.

"Realistically," he said speaking of the timing, "these big projects take what they take."