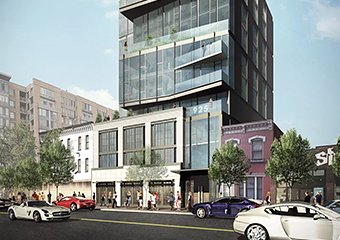 On Tuesday, ANC 63 voted in favor of a planned residential project in Mt. Vernon Triangle. UrbanTurf was the first to report of the ANC’s support, further writing that the project will redevelop a historically protected, single-story building with an additional nine stories and penthouse constructed atop it.

According to UrbanTurf, "The ANC voted, with one abstention, to support the design concept on the condition that an additional setback is created to delineate the historic ground floor from the floors above."

Located at 925 5th Street NW, the planned project will house 40 condos with studios, one-bedrooms, two-bedrooms, and one-bedrooms with a den. There will either be an amenity or retail on the ground floor.

Back in February 2014, the owner of the Shaw beer garden, Dacha, planned on opening a second location at 925 5th Street NW. According to the MVTriangle Blog, the original plans for the site were to convert the empty plot into a one-story pavilion with an open air beer garden-style sitting area. The ANC Finder website indicates that ANC 6E showed support for the project with 5 yeas and one nay. The new location would have been called Dacha 2. A source at Dacha told Curbed that while they had an LOI, they did not agree on all terms in the end. What terms these were were not specified.

On September 22 or 29, the Historic Preservation Review Board will consider the application. The developer of the project is Peebles Corporation, while the architect is WDG Architecture.