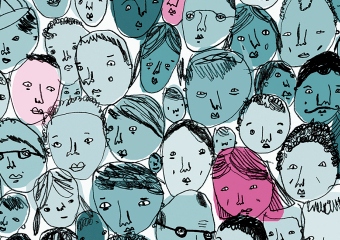 In the beginning of 2018, the newly installed chairman of the Real Estate Board of New York, William Rudin, announced that diversity was a key item on the organization’s agenda.

Rudin’s direction came during a political climate that has forced a reckoning in real estate, and many other industries over the inclusion and representation of women, people of color and other underrepresented minorities. Currently, REBNY’s membership and upper echelons are representative of the industry: they are overwhelmingly white and male, and are therefore wholly unreflective of the city in which they operate.

Per Rudin, REBNY is determined to be a leader in making a change in the status quo. “Increasing diversity is a priority for the real estate industry and we are expanding our efforts on multiple fronts,” Rudin said at the group’s annual banquet last year.

Those efforts would be directed at every level of the industry, Rudin said, starting from education and recruitment at the entry level to better representation at the executive level.

A year in, the organization has taken several preliminary steps to achieve that change, but has yet to implement any initiatives. John Banks, the president of REBNY, said the organization was in the research stage and would be rolling out specific programs in the coming months.

“Over the last year, we’ve been engaged in many activities, a lot of research to determine what the best practices are,” Banks, who is the organization’s first black president, told Commercial Observer. “We’ve been meeting with a variety of stakeholders and other groups and we are in the real estate space trying to work on diversity.”

A key issue, Banks said, is increasing awareness and education at the ground level so that more women and minorities enter the business. “One of the data points that we’ve come up with in our research and part of the issue is that certainly high school graduates and many folks in college don’t think of the real estate industry as a career path,” Banks said.

The group leading the effort is the newly created Diversity Working Group, co-chaired by CBRE’s Darcy Stacom and Bernard Warren, the president of Webb & Brooker, one of a handful of people of color on REBNY’s 146-member board of governors.

Amy Rose, the CEO of Rose Associates, and one of five women on REBNY’s executive committee, is a member of the working group. Rose stressed the need to address diversity at every level, beginning with expanding the pool of talent, while also highlighting the diversity that already exists.

“How are we fostering and attracting talent, and how do you develop it so they can someday be leadership?” Rose said. “You have to grow and develop the talent pool, so then they will have that seat at the table.”

To that end, REBNY is working with groups that focus on job placement, internships and training in areas like construction and management.

However, not everybody has been impressed by REBNY’s efforts. Don Peebles, the Chairman & CEO of Peebles Corporation, and one of the city’s highest-profile black developers, said the focus on job placement was paternalistic and dismissive of the existing talent.

Opening the doors to more women- and minority-owned business is an urgent issue, Peebles said. He was on REBNY’s board of governors in the past, but withdrew before his two-year tenure was over in 2016, out of frustration with the way the issue was ignored. “Real estate and construction in New York City is an entrepreneurial business that provides tremendous opportunity for economic growth and wealth creation and job generation,” he said, “But it’s not reflective in any way of the demographics of New York City.”

He said the key issues that need to be addressed are access to capital and access to opportunity, and that requires effort on the part of banks, and the public sector, as well as from industry players. “Unfortunately, people hire who they’re comfortable with,” he said.

Another area of focus is increasing the visibility of women and minorities in top positions at real estate firms. Rose said that making a change at the executive level is crucial. “When you are able to see a person who looks like you or represents you being director of a company or being an executive, then you can see what’s possible to achieve in a career,” she said. “That’s why it’s important for that to exist at the highest level possible.”

In addition, REBNY says it has made an effort to include a woman or person of color on every panel and to highlight and honor their accomplishments at occasions like the annual banquet.

“I think REBNY can use some younger blood and some fresher faces,” Stefani Berkin, the president of R New York (formerly Charles Rutenberg) and a member of REBNY said, but she felt that the organization was headed in the right direction. “I’m already feeling the change.”

But whereas white women have made some progress within REBNY and within commercial estate as a whole, with a steady trickle of women entering the C-suite, minority communities are virtually invisible at the highest levels. At the close of 2018, REBNY’s 50-member executive committee had seven women and one person of color, and the new cohort for 2019 consists of five white men.

That’s representative of the industry. “I don’t know of one major company that’s a member of REBNY that has any diversity when it comes to minorities, especially African-Americans or Latinos, in the upper management in a company,” Peebles said.

That being said, on the board of governors, the cohort of 10 new members in 2019 is more diverse than usual, and includes several women and minority members, bringing the total to 19 women, and fewer than 10 people of color, on the roughly 151-member board.

It’s a step in the right direction.