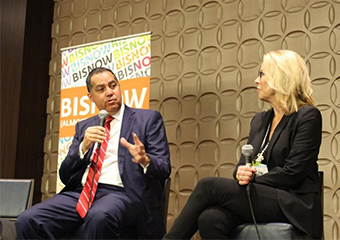 Beyond The Bio: Bisnow’s 16 Questions With Developer Don Peebles

A successful developer who doubles as a sought-after media personality, writes books and has political aspirations. No, not now-President Donald Trump.

Peebles Corp. CEO Don Peebles and moderator/McDermott Ventures founder Pam McDermott at Bisnow's Trump Era Forecast event in BostonThe above is referring to Peebles Corp. Chairman and CEO Don Peebles, who founded the firm in 1983. Peebles has steered the privately held real estate investment and development firm into a national player with more than 6M SF and $5B worth of projects completed and underway in cities like New York, Philadelphia, Boston, Miami Beach and Washington, D.C. Peebles' accomplishments do not stop there. The author of “The Peebles Principles" has also appeared as a guest on CNN and Fox and is a political mainstay. At present he is chairman of the board of directors of the Congressional Black Caucus Foundation and a former member of President Barack Obama’s National Finance Committee. He also has mulled running for office in the past, especially as mayor of New York City. Bisnow: How do you describe your job to people who are not in the industry? Peebles: I am the equivalent of a movie director and producer combined. I don’t have any specialized skill or technical expertise, but I bring vision and leadership. I attract talented people to work on our projects and give them the autonomy to apply their skills. A more technical and generic description is I buy land or existing structures and create value by transforming them into the highest and best uses. That may include office buildings, residential buildings and hotels. Bisnow: If you weren’t in commercial real estate, what would you do? Peebles: I would be mayor of New York City or president of the United States.

Bisnow: What is the worst job you ever had? Peebles: There is really no such thing as a bad job! There is honor and dignity in any job and there is always pleasure that comes from those feelings. The job that was the hardest was when I was 13 and I worked on a janitorial crew cleaning the offices of a large orthodontist practice. My job was to pick up all of the wires removed from the patients braces that ended up on the floor. The floor was industrial carpet and the wires would get stuck in the loops of the carpet. It was very frustrating and time-consuming, especially for a 13-year-old boy. Bisnow: What was your first big deal? Peebles: My first big deal was in 1986 when I was 26 years old. I proposed building a 100K SF office building development in an economically blighted area in southeast Washington, D.C. I secured a lease from the government of Washington, D.C. I completed the building in 1989, still own this building today and the city is still the major tenant. In fact, my son is overseeing the renovation of the building as we speak. Bisnow: What deal do you consider to be your biggest failure? Peebles: Luckily, to this day, I have been able to mitigate most losses associated with developments that haven’t gone as projected, especially as a result of the financial crises of 2008. The biggest failure I have experienced as a developer was losing an election ballot initiative to rezone a 90-acre site I owned on the Pacific Ocean in a town called Pacifica in California, just outside of San Francisco. After campaigning for several months we lost the vote by about 500 votes. I ended up selling the site a few years later for a small loss. Bisnow: How do you define “making it”? Peebles: Being able to have the trifecta — A happy and loving family life, an enjoyable and profitable career, and the means to pay it forward. Bisnow: What is your biggest pet peeve? Peebles: Incompetence. Bisnow: Who is your greatest mentor? Peebles: My mother. She taught me compassion, empathy and determination. She encouraged me to dream big and to develop the self-confidence to make those dreams come true. She taught me by action that it wasn’t how much you had, but what you were willing to give.

Bisnow: What is the best and worst professional advice you've ever gotten? Peebles: “Focus on the down side and the upside will take care of itself.” Bisnow: What is your greatest extravagance? Peebles: Flying private. It’s a big time-saver. Especially, taking a helicopter to East Hampton to visit my summer estate in Bridgehampton or to Teterboro Airport to the plane. Bisnow: What is your favorite restaurant in the world? Peebles: Louis XV in Monaco. Bisnow: If you could sit down with President Donald Trump, what would you say? Peebles: I know President Trump and met with him shortly after he was elected. I am intensely focused on creating an environment of equal economic opportunity, especially in the real estate business, which has always excluded diversity. The president and I had a positive discussion about working together to drive this agenda forward. When I see him again, I plan to remind him of this discussion and encourage him to implement the plan of action we discussed. Bisnow: What's the biggest risk you have ever taken? Peebles: Dropping out of college and giving up on a career in medicine. Bisnow: Whose work do you most admire? Peebles: My friend Robert Smith. He is an immensely successful entrepreneur, a committed father and husband and spends his time and money giving back by supporting causes that improve the quality of life for many forgotten people in America and around the globe. He sets the standard of a world citizen. Bisnow: What keeps you up at night? Peebles: My wife and children’s safety, good health and happiness. Bisnow: Outside of your work, what are you most passionate about? Peebles: Outside and inside of my work it’s my family. I spend every possible moment with my wife and children. They are my driving force and the reason I strive to be a better person and to succeed in all that I do.