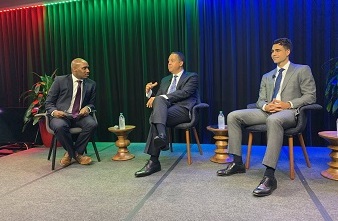 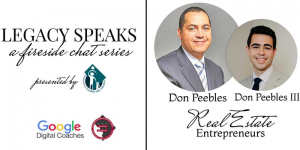 By Sophie Kaplan - The Washington Times

Jason Wallace says he knows the people he helps as the director of the D.C. Mayor’s Office on Men, Fathers and Boys someday will be role models for his own son.

“My son will be inspired from the boys that we’re inspiring today,” said Mr. Wallace, whose son is 2 years old. “This is very personal to me.”

Mr. Wallace’s work centers on creating opportunities for men and boys of color to have role models.

His office’s three goals are to: set up programs and opportunities to empower boys for greatness; close achievement gaps using government resources, nonprofits and programs; and help fathers build connections with each other and their sons.

Mr. Wallace’s average day reflects those goals. On a stage at Google’s office in Northwest on Monday, he moderated a conversation between Don Peebles, a D.C. native and one of the wealthiest black businessmen in the country, and his son Don Peebles III about their relationship, the real estate business and resources available to audience members looking to start businesses.

Every other month, the office hosts a Father Fun Day, an outing or activity provided at no-cost for cash-strapped families. The office has taken fathers and sons to a Washington Nationals baseball game and a fishing trip, and is planning a golf trip for the next outing. The activities also help create community among fathers.

A study conducted by Color of Change, a nonprofit civil rights advocacy group, found that 59% of poor families depicted in the news media were black while only 27% of families living below the poverty line are black. The study found that the media regularly overrepresents blacks as criminals and black fathers as absent.

Mr. Wallace’s office is set to launch next month a flip-the-script campaign to challenge those negative media stereotypes with positive images of men of color and their families on social media and public transportation around the District.

“And because [black boys] don’t have positive images of what positive black people look like” have negative expectations about what they will become, the director said.

Inspired by actress Jada Pinkett Smith’s Facebook Watch show “Red Table Talk,” Mr. Wallace is hosting his own show on Facebook Watch called “Manuscript,” where he will talk about men’s mental health relating to topics such as incarceration, grief and fatherlessness.

“There’s a ton of men that are dealing with the same thing and it’s OK to be vulnerable,” he said. “It’s OK to say that I need help to say that your feelings are hurt.”

The six episodes of the first season will come out in early September.

Once all of the initiatives are in motion, the Office on Men, Fathers and Boys will be able to measure its success in achieving its goals.

For example, one program that will start this fall is a peer mentorship program in which high school students will mentor elementary school boys.

The office is keeping track of how many students are participating in this program, how many mentorship sessions are completed and changes in grades and truancy for the students.

“Closing the achievement gap is ensuring that these boys show up for class,” Mr. Wallace said.

In addition to the office, there is a commission of 11 people who make legislative and policy recommendations to address challenges that men of color face. Mr. Wallace said they are working on legislation about health, well-being and reentry to society after incarceration.

There are of course many organizations that are focused on addressing the challenges fathers, men and boys of color face, but this is the only city in the country, that Mr. Wallace, is aware of, that has an office like this and he wishes more people knew about it.